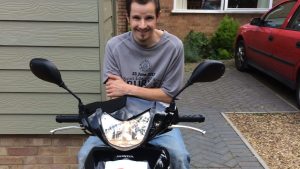 Adam started his journey to independence when he moved to FitzRoy Supported Living in Suffolk. Harry, Deputy Manager, told us how life just keeps getting better for Adam.

When Adam first moved to FitzRoy, he lived in a supported living house with other residents who received round the clock support. Staff saw that Adam had the potential to be more independent, so started to empower him to do more things for himself to help build confidence. Eventually Adam’s independence grew so much, that his support team and social services felt that he was ready for his own home.

A new flat was built for him within the grounds of the main supported living house. He is now so independent that he needs very little support from staff.

Adam is extremely fit and is a member of a running club, where he goes to train in the evenings twice a week. He also takes part in running events with the club and has won lots of medals. He had been cycling the five miles into town and back on training nights, but that’s not great in the winter when it’s dark, and we were often picking him up. That’s when we had the idea of encouraging Adam to get his licence so he could drive a scooter.

We bought books and supported Adam to study for his CBT course, which he successfully completed. He is now the proud owner of a brand new Honda Vision scooter. Being on the road and having this new found independence has meant so much to Adam, he couldn’t quite believe it at first! Having his scooter means that he can now visit friends and family that are further away than his bicycle would allow him to go.â