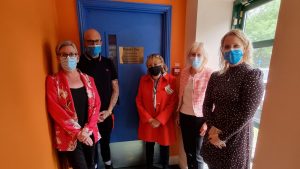 A new sensory room – ‘Danny’s Den’ – has been unveiled at The Maltings,  FitzRoy’s day service in Norfolk,  in memory of ‘larger than life’ member, Danny.

Danny, who was a member at The Maltings, passed away in 2017. After a family member left a gift in their will for the day service, the team began working on creating a brand new sensory room for everyone to enjoy in memory of Danny.

Service manager Kerensa said: “We wanted to update the sensory room for a long time but never had the money. After we were left this gift, it felt like Danny was looking over us.

“We had the current sensory room assessed and plans drawn up for the equipment we wanted installed. It has taken a year and a half of hard work – but we are so proud of what we have been able to achieve with the space.

“There’s a whole new set of equipment – we have waterless bubble tubes, a sound beam system on the ceiling and a beat box mat to jump on. In what used to be the ‘quiet room’ we now have a UV room which feels like a 90s disco. We also have brand new sensory materials.

This new room is going to be amazing for all our members. Although it was a good space before, there’s more in the sensory room for everybody now.

“You don’t have to just go in there for a sensory experience, you could also go in to play games. It is more accessible for all our members.” 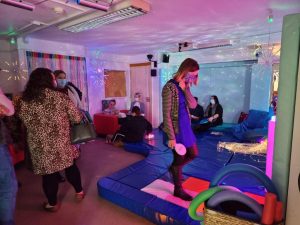 Danny’s sister-in-law, Sue, speaking for the family, said: “Danny thoroughly enjoyed his time at The Maltings. He made some good friends, had wonderful experiences and was very fond of the staff. We hope everyone who uses the sensory room will enjoy it – including the staff!”

We were amazed when we found out we had been left this money. Everyone’s jaw dropped – just like that we were able to make some real impact to benefit everyone at The Maltings.

“Danny was so lovely – he was such a brilliant character at The Maltings. When we lost him it was a massive part of The Maltings gone. Dan really benefited from the sensory room and the impact it had on him showed.

“We always wanted to do something for Danny, so this has been the perfect way to remember him.”

The team at The Maltings held a special event to unveil ‘Danny’s Den’ for Maltings members and Danny’s family, along with other friends of the Maltings including HM Lord-Lieutenant in Norfolk, the Lady Dannatt and North Norfolk MP Duncan Baker, who just raised over £1,000 for FitzRoy in the London Marathon.

It was such a brilliant occasion to get everyone together to officially open our new sensory room ‘Danny’s Den’ and to remember Danny.