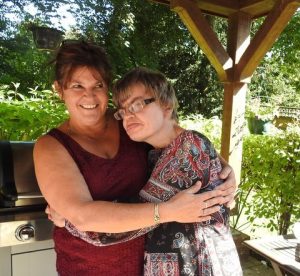 Our incredible staff at Donec Mews, Surrey went above and beyond for the people we support after suffering a 50 hour power cut during the recent storms.

Donec Mews suffered a power cut on Friday afternoon after a tree fell and hit a cable. The team initially believed that the power would come back on after a few hours, however, when it didn’t, the team had to think creatively and act fast to get through a difficult time.

“We didn’t realise how much we relied so heavily on electricity, everything in the home is powered by electricity – people’s beds, lifts, chairs.

“A power cut usually lasts a few hours, and we had emergency lights so we thought we would be fine. However, that was not the case. The emergency lights only lasted for six hours and when we contacted the electric company, they said the power wouldn’t come back on until Monday!

“The staff were brilliant. They all came together and helped in every way they could. Some of the team came in on their day off, they got torches for us, hot drinks and went to McDonald’s to make sure the people we support had a hot meal.

“We couldn’t do anything – laundry, washing, nothing. The staff had to come up with unique and resourceful ways to get hot water like using the BBQ! It was incredible.

The people we support are our priority and our staff are always thinking on their feet, creating ideas and working together as a team to make sure we deliver whatever happens!

“The people we support have been just as amazing. They couldn’t go outside as the storm was too dangerous. They didn’t have any electricity for watching TV or DVDs. Despite this, they were all understanding as the staff reassured them and made sure they were smiling and laughing all the way through.

“Veronica, our senior support worker posted on the Grayshott community Facebook group, asking for support with flasks, hot water, soup, torches and more. The response from the community was tremendous. Our village is little, so we didn’t know what to expect as we have never asked for anything before – but it was such a lovely surprise to see the community support us.

It really showed what the true meaning of community is, which is sticking together through difficult times.

“Luckily our home holds heat, and it didn’t start getting cold until Sunday, but we made sure the residents had enough blankets and duvets to keep warm. When the power came back on Sunday evening, everyone gave a big cheer!

“Although the weekend was challenging, in the true style of Donec Mews, everyone pulled together and supported each other. I am very lucky to manage such an amazing home and be a part of an amazing community.”

From wing walking to help fundraise for their new summer house to organising their own mini Olympics during lockdown, the staff at Donec Mews have a history of going above and beyond for FitzRoy.