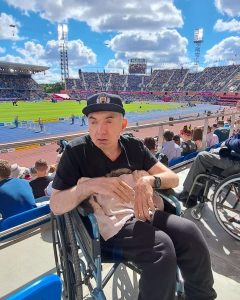 Keen sports fan Andy knew he wanted to be part of the action when he found out that the Commonwealth Games would be heading to Birmingham this year.

Andy, who has cerebral palsy, loves to spend time on his computer researching sporting events around the world and making presentations about them.

“He follows things like the World Cup and the Olympics and the Commonwealth Games and he’ll research when the next one’s due, which country it’s in, everyone involved and what stadiums are being used.”

A couple of years ago, Andy had mentioned that he wanted to volunteer at the Games. We tried that avenue, but we didn't have much luck and I thought, well, if he can't volunteer, he can still attend.

When Andy managed to secure tickets to the athletics, planning began for his trip from Altrincham to Birmingham. He is very keen on train travel so Davina supported Andy to book tickets and accommodation and then, along with a member of staff, Andy made the journey to Birmingham and had a fantastic time and enjoyed every minute of the two day trip.

Davina said: “We support him in doing the things he wants to do. He loves his sport so being able to go to events is important to him and he likes going.

“A few weeks before the Commonwealth Games opened, Andy started getting up at the crack of dawn and getting ready for the day, so we knew he was getting excited about the trip. He watched the whole opening ceremony and stayed up for the closing ceremony too. Now things have calmed down a bit he’s gone back to having a bit of a lie in in the morning.”

This was not Andy’s first trip to a major sporting event – he attended the London 2012 Olympic Games – and, if he has his way, it won’t be the last. He has already expressed his desire to visit Paris 2024 Olympics and the next Commonwealth Games in 2026 in Australia.