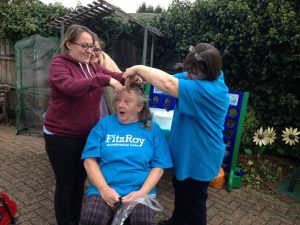 Beverley has raised more than £1,000 for FitzRoy after she braved the shave’.

Wanting to make her mark after working at FitzRoy for eight years, Beverley decided to take part in a fundraising event like no other.

We spoke to Beverley, deputy manager at our Suffolk supported living service, about her experience.

I decided I was going to do a headshave about a year ago and said I would definitely go through with it if I raised over £1,000 which I have! I had seen headshaves before on social media and always thought I wish I could be brave enough to do that’, so it has always been at the back of my mind.

I have done some fundraising for FitzRoy before, but mainly things like car boot sales and small charity events, nothing to this scale. What pushed me to do the headshave now is because another service in Suffolk needs a sensory room, so I finally decided to take the plunge and help raise the funds to get one.

Lots of people have said you are mad’ or you’re so brave’, but this isn’t about me at all, it’s about the cause. That’s the important thing. That’s what I kept reminding myself of whenever I’ve felt nervous about doing it.

“I am just one person, a small fish in a big pond, but my heart is big, and this is my contribution to FitzRoy.”

Beverley took part in the headshave on Thursday, 2 October, where everyone got involved and helped to cut her locks.

It was actually really fun, the people we support all got involved and cut a bit of my hair, they definitely enjoyed it. I am really proud of myself. I didn’t like the sensation of the clippers very much though!

Working at FitzRoy has really made me feel like I have done some good in my life, I have found my vocation, it has really changed my life.