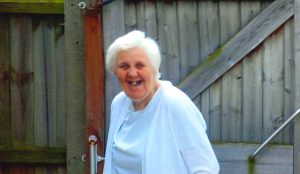 It’s always incredibly hard to say goodbye to loved ones. Very sadly a long term resident at our supported living service in Suffolk, Chrissie Canham, passed away earlier this month. Chrissie, 65, had lived at Blomfield Street since it opened and was known affectionately as the Queen Bee and dancing queen.

Unfortunately Chrissie was diagnosed with cancer earlier this year. Staff made sure that her final months were at home, and filled with love and friendship.

“We said our goodbyes, at a beautiful and emotional service, to one of the most wonderful, strong and amazing ladies I have had the pleasure to spend time with, Chrissie Canham.

“When Chrissie was diagnosed with cancer, deputy manager Beverly Hayes immediately started to implement ways to ensure that she could remain at home surrounded by those she knew and trusted and her familiar things.

“Some of the team were nervous about supporting Chrissie through her illness and at the end of her life, but Bev was always at the end of the phone or down at Blomfield Street to make sure the residents and staff were okay. She gave the staff confidence and showed them how much of a privilege it is to care for someone at the end of their life.

“Bev and the team did a lot of work to prepare the other residents, a couple of whom were quite close to Chrissie. Staff supported them to understand what was going to happen and that she wouldn’t be around any longer. This is an incredibly tough part of the job but so important that we have those conversations with the people we support.

“The staff did the most amazing job and should all be so proud of themselves. We have had feedback from the GP, the district nurses and the hospice that Chrissie was so fortunate to have such a dedicated team around her.

“I am so proud of Bev and the staff team – although it is very daunting to support someone at this time it is so important they have people they know and trust around them and also those who understand them. They will be struggling to understand what is happening and will be more vulnerable than ever, this was why we made it very clear from the start that we would do all we could for Chrissie to remain in the home she was comfortable in with people around her who she had known for years.

“Chrissie will be so missed by the team and by her friends here.”