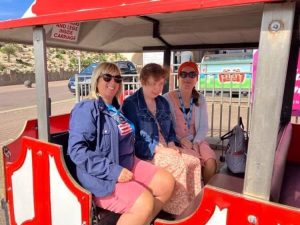 At FitzRoy we believe people with learning disabilities and autism should have access to therapeutic independent living, local to their families and community.

We work with several local authorities on providing an alternative to institutions and are proud of what we have achieved, particularly in Nottinghamshire and Norfolk with our specialist supported living and support at home services.

Charlotte proves how supported living can be the answer. We have supported her for over 20 years, in her own bungalow, with up to two staff supporting her at any one time. Without this support, she could not manage in her own home, but now she is thriving, making choices about her life, and doing all the things she enjoys.

Our Norfolk Support at Home service support Charlotte to live independently, making herself meals, making choices about how her home is decorated and furnished, and carrying out all the day to day tasks – including housework – that many of us take for granted.

This year, Charlotte has been able to take her first ever five-day holiday thanks to the consistent support of her team.

Service manager Ginny, who was once one of Charlotte’s support workers, and her team, have got to know Charlotte over the years and have seen huge changes as she matures and the team work with her to support her to become more independent.

One of the keys to this success has been the long-standing care team who have been with Charlotte as she has grown from her 20’s to her 40’s and learned how to meet her needs and support her, understanding what might cause her distress, whilst also finding safe ways to introduce new experiences.

Ginny said “There was a period when Charlotte couldn’t cope with the colour red. No red foods, no one could wear red or even have a red phone case but gradually over time we would carefully introduce something or get her to try a strawberry, for example, and now she is totally fine with red!”

Charlotte progressed to the point that the team were able to think about holidays and in the last few years she’s been able to take some local weekend breaks.

This year, Charlotte and her support team decided they would try a longer holiday, further away from the Norfolk coast. Ann and Lorraine, who have supported Charlotte for many years, spent five days with her in a caravan at an Essex holiday park, something that would have been unthinkable five or six years ago.

The week also saw lots of firsts for Charlotte; a train ride in Clacton, going on the pier, conquering her fear of heights on a Ferris wheel and to top it all she even tried – and enjoyed – the lodge’s private hot tub.

We’ve got a brilliant team who all just want the best for Charlotte and I’m so proud of the changes I’ve seen in her since I started as her support worker back in 2006.