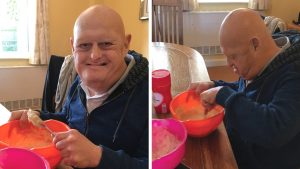 Life has changed for Corky since he came to FitzRoy two years ago.

Corky first came to FitzRoy’s registered care home The Pastures after being in hospital when he’d broken his leg. His stay with us was supposed to be on a respite basis for rehabilitation, but his health needs changed and he needed more care, so his move to The Pastures became permanent.

Service Manager Natasha Davison said “After his fall, Corky really lost all his confidence and even as his leg healed, he wouldn’t walk, he would only use his wheelchair. He was very anxious about standing up and frightened of getting around without his wheelchair.”

“We supported him, encouraging him to move around and let his leg bear his weight. With a lot of reassurance, and building up his trust, we encouraged him to try harder, to progress, and he gradually started to move about independently, walking without his wheelchair.

“As well as his physical health, as we got to know Corky, we also looked at his medication levels. We felt they were too high for his needs, and he would often be sleepy and not very alert. Now we have reduced his medication and can really see a positive change in him. His cheeky personality is shining through, he is so much more talkative, and engaging more with us, and together with his increased mobility he is now a different person. He is really independent, visiting his friends and he is just really so much happier.”