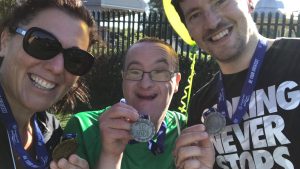 Dan and support worker Michelle are tying up their laces for the Great South Run 5k â and Dan has said he was born ready’.

Dan has lived in supported living in Hampshire since July, where FitzRoy support worker Michelle helps him with activities like shopping and swimming. However, Michelle has also taken on the role as Dan’s ‘trainer’ after he expressed an interest in the Great South Run 5k.

Michelle said: When I first started supporting Dan I met up with his mum and dad and in conversation it came up that other members of his family were doing the 10-mile Great South Run.

Dan wanted to do the shorter 5k Great South Run, so I said I would be happy to run it with him. I didn’t want him to do it alone or miss out on taking part entirely. I have run a 5k race before, so I thought why not help Dan whilst raising money for FitzRoy as well.

Dan has raised money for a number of charities, including Cancer Research UK in last year’s Great South Run 5k. This year, Dan is running for the Epilepsy Society for his cousin, who lives with epilepsy.

We have been training by going to the gym and doing weights to strengthen our muscles, but as it comes nearer to the race we have been running and walking more on the treadmill. The Tuesday before the race we are going to do an outdoor run, as long as the weather is nice enough!

I think Dan has really enjoyed working towards something, he used to go swimming more but this has really sparked a passion in him for running. He has had problems with his back and the walking and running has really helped with that.â

Dan said: I am so ready for the run – I was born ready. I am really excited, and I am so happy and proud of myself for all the charity work I have done, and I don’t want to ever stop. I have really enjoyed the training – Michelle is the best.â

To sponsor Michelle, who is raising money for FiztRoy, click here.

To sponsor Dan, who is raising money for the Epilepsy Society, click here.