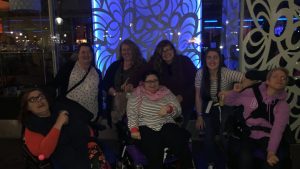 Three ladies who are supported by FitzRoy Supported Living in Hampshire went on their dream holiday together.

The three friends, Aimee, Debbie, and Rachael, share a house in Waterlooville and decided they would like to go on an 80s weekend at Butlin’s. After lots of planning and organising, the three ladies and four Support Workers packed a van and relocated to a hotel in Bognor Regis for the weekend. The ladies are all wheelchair users, so even hoists were packed into the van to ensure that they could be supported in and out of their wheelchairs.

It was the first holiday that any of them had been on in a while and their first together too, so they had all been looking forward to it. Butlin’s was perfect for Aimee, Debbie, and Rachael, as they all love live music. There were plenty of acts on offer including Katrina and The Waves, Toyah Wilcox, Tony Hadley, and DJ Pat Sharpe, so the ladies were in their element.

Becky, a Support Worker who went along, told us about how much fun everyone had.

Being at Butlin’s was just fantastic and it felt like one big girl’s holiday! The three ladies had the time of their lives and were out every night until 2:00 am in fancy dress, dancing the night away together. We had VIP passes to everything so we would be as close to the front as possible for every act.

It was great to see the public being very accepting too. People would come and dance with us, commenting on how we looked like a fun group to be out with. The three of them made lots of friends over the weekend.

Butlin’s staff were so brilliant and accommodating. As the place is all safely enclosed, the ladies could do their own thing which gave them a real sense of freedom and independence. Debbie in particular could go off and meet us back in the hotel bar which she loved.

When it was time to leave, none of us wanted to go. Aimee, Debbie, and Rachael, had such an amazing time together that they want to book again as soon as possible. They’re thinking about doing the Butlin’s 90s weekend next. It was brilliant being able to give the three ladies the opportunity to stay out late and party like anyone else and so was rewarding to see them happy and relaxed.

When we asked Aimee about her holiday, she said:

It was very friendly, I loved being at Butlin’s. It was funny, we had a laugh. Dressing up in an army outfit was the best part.