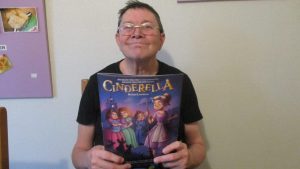 Raymond, who lives in a FitzRoy residential home in Coventry, often reads the FitzRoy blog which inspired him to share his own success story. Katie Lamb, his support worker and key worker, told us more.

Raymond has been working hard alongside his staff team to achieve two of his goals  to go to the cinema, and to go and see a pantomime. These goals were a particular challenge for him due to mental health and anxiety and because of this, he hadn’t been to the cinema in twenty years!

After a lot of hard work, and some great progress, Raymond decided to attempt to go and watch one of his favourite animation characters, Paddington Bear. He could not believe how modern and lovely the cinema was. The trip was such a success and Raymond enjoyed it so much that he is can now going on a monthly basis.

Goal two was to attend a pantomime show. Because of all the lights, excitement and high stimulus, a show was previously too much for Raymond’s anxiety. This year however we thought it might be possible to go to the Belgrade Theatre in Coventry as they introduced a relaxed version of Cinderella. A relaxed show is especially for people who may have a learning disability, autism, or who simply like a little less noise and not so many flashing lights. We thought this sounded perfect for Raymond, and he decided to give it a go.

Staff supported Raymond one-to-one to make sure he had the choice to leave at any point if he felt it was getting a bit too much, however it was another huge success! Raymond really enjoyed the show and was very pleased and proud of himself that he achieved another one of his goals  something that he has wanted to do for almost ten years.

Raymond is now looking forward to setting his sights on some new challenges and goals that he can look forward to achieving in the future.

Raymond told us how he felt in his own words: