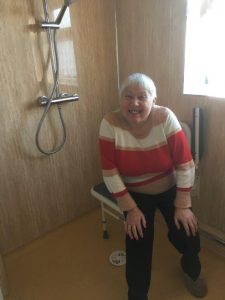 Jane lives in her own home and receives a little one-to-one support from FitzRoy Support at Home in Norfolk. However, something was stopping Jane from feeling fully independent. Ginny Margison, Support at Home Manager, told us more.

Jane was unable to have a bath at home as she couldn’t climb into it and didn’t feel safe to give it a try. Instead, she was having a bath at her day service which wasn’t ideal and meant she was limited how often she could bathe.

Jane longed to be independent and have a shower whenever she wanted one and in the privacy of her own home. Her Support Worker, Chrissy, had a brilliant idea which would really transform her life. She spoke to Jane about turning her bathroom into a wet room. Jane thought this was a great idea, so together they started the journey of looking at costings and finding someone to fit it for her.

They found a lovely firm called Style Mobility and Jane had lots of fun choosing colour schemes. They had planned originally to only panel half of the room to keep the costs down but instead they panelled the whole bathroom and even managed to reduce the total bill by a massiveÂ Â£800! Throughout the two weeks of fitting the wet room Chrissy found the workmen to be very person centred and considered Jane’s requests at every hurdle, meeting all her needs.

Jane is thrilled with the results and is now exclaiming that she can have a shower without help! She feels hugely independent. Well done to Chrissy for being creative and thinking of the perfect solution for Jane.â