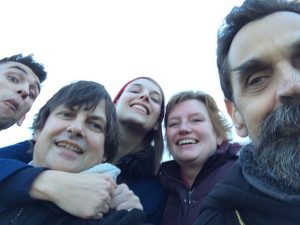 Dave can now relax in the knowledge his brother John is being cared for and can live the life he wants.

Finding the right home is essential for the people we support, we all want to be happy where we live, and something our pioneering founders fought for was a proper home for people with learning disabilities and autism. John recently moved into our supported living service in Nottingham. We caught up with his brother Dave, to find out how it was going. Dave told us:

“John didn’t go to mainstream school, he stayed at home with our mum. I’d look after him after I got home from school to give mum a break before my dad got home from work.

“When dad died in 1997 it really brought home to me mum’s mortality too, so we started making preparations for John to move home. Mum was also getting older and didn’t have the physical capacity to look after him that she once had.

“In the early 2000’s John moved out of the family home to a place that, although he lived there for many years, wasn’t good for him. His needs were not respected and we didn’t feel listened to.

“John moved to his home with FitzRoy earlier this year, and before he had even moved the staff were helping him. The upheaval wasn’t as traumatic as I thought it would be on John because of the way that he was prepared for the move.

John is a different person. He gets on well with the other guys that he lives with. They are like a breath of fresh air and often will say “don’t worry, I’ll look after John’. The staff can’t believe the John that we describe, they can’t see any of the behaviours we have talked about. John picks up on nervousness in others and he is happier at FitzRoy because the triggers for his behaviour aren’t there anymore.

“The staff are very friendly and respectful of John’s needs. He gets on well with all of them. They help him and really encourage him to do things for himself, like making a cup of tea. He also sees the other residents being independent and he mimics them, which is typical of autism.

“His support team prepare him well for new situations that would normally upset him. They reassure him and explain things to him. The next step for John is to help him build up his confidence to go to the doctors as he hasn’t been for year.

“I absolutely trust FitzRoy. We’re still waiting for the bomb to drop because of previous experiences and going through that stress. But FitzRoy just get on with it and they know what they are doing. It’s clear to see that FitzRoy staff are well trained and have special training for managing autism.

“He’s really happy now, he’s a really nice guy and great company, a real pleasure to be with. We can relax in the knowledge he’s being cared for and can live the life he wants. It’s difficult to know how you can improve on that!”