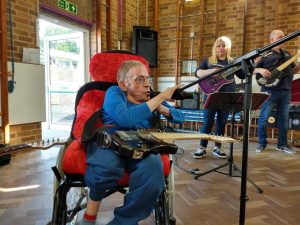 John was was loved by the whole community. After passing away at the age of 70, staff at FitzRoy’s registered care home Dalvington want to make sure John’s cheeky personality is remembered.

John moved to the care home in Malvern, Worcestershire, in 1974, and soon became immersed in the community. He went to church every week where he made a lot of friends and he joined a local music group for people with learning disabilities.

Deputy manager Karen Bannister wanted to share some of her favourite stories of John after he sadly passed away on 18 December.

We at Dalvington have many fond memories of John, although some of his stories were not always true! He was known many years ago for saying that we made him clean the windows at home, and back then we lived in a three-storey house! You can imagine the congregation at church were mortified.

He loved music and went to Snoezelen every week â a music group for people with learning disabilities. They learn how to play instruments and sing and put on shows every year. Snoezelen have said they are dedicating their show at the end of January to him, which is a lovely gesture.

He had a karaoke machine in his room and loved singing his favourite songs âKing of the Road’ and âWild Thing’.

Over the years there were many more adventures John went on. Some of his favourite trips included going to Lourdes regularly back in the 80s, a holiday to Spain and taking a trip to Disneyworld Florida.

He had only just celebrated his 70th birthday back in September. To make the day special for him we held a party and got him a cake shaped like a guitar.

I always describe him as a little man with a big character. He was just so loved in the whole community and we are all going to miss him.â

Sign Up To Keep Up To Date With All Of FizRoy News.