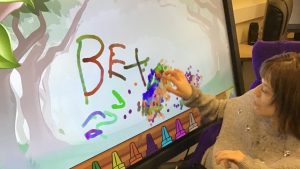 New technology is making a huge difference to the lives of the people we support, giving them more choice and control than ever before.

FitzRoy Malvern introduced some CleverTouch screens – a huge touch screen, like a television sized iPad – a few months ago, thanks to a grant from Karten. The people who live at Malvern are aged between 28 and 67, all have complex learning and physical disabilities and high support needs and they are engaging with the CleverTouch screen in lots of different ways.

Bex is 28 years old and previously had lived with her mum and dad. When she moved to Malvern two years ago it was quite an upheaval for her, but she settled in really well. She communicates mainly through finger gestures and facial expressions with the odd word. She also likes to sing to communicate too, and often ends up dancing and laughing.

When we introduced her to the CleverTouch screen, Bex had never engaged with anything like it before. She loved using it for drawing and being creative, using the tactile pen and playing music. Her increasing confidence with CleverTouch enabled her to graduate to an iPad, on which she’s been using the MyChoicePad communications app, MyChoicePad uses Makaton signs and symbols to enable people to clearly express their feelings and make choices. One day, we showed Bex a photo of her mum and asked her who it was. She was able to press the button for âmum’ and when the app voice spoke the word, Bex was absolutely beaming as this was the first time she could express what she wanted to say using spoken words. The freedom the technology enables has worked wonders, she uses the iPad to Skype her family, it’s so much easier for her to communicate with them, she doesn’t need to wait for their visits, she can contact them whenever she wants to.

Karen, Malvern’s deputy manager, has worked for FitzRoy for 31 years. She said: “I welcome the difference that technology makes to the lives of people with learning disabilities. Technology such as the CleverTouch screen and the iPad expands their communications choices â for how they want to communicate, to who and when – and this freedom, along with learning new skills,Â  all helps build their self-esteem. The technology encourages them to use the speech and communication methods they have used all along, but it enhances them. They’re able to build on their existing communication skills, trying different approaches that suit them and get across what they need to say. It helps them achieve goals, and it’s very rewarding. My favourite part of my job is seeing the smiles on their faces as they achieve new goals.”