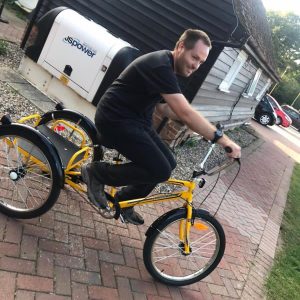 When the first lockdown was lifted, Oliver – who we support at Boldshaves Oast care home in Kent – became very nervous and anxious. Staff noticed the change in his behaviour and quickly took action to find ways to support him through these challenging times.

Deputy manager Michael said: “When news of covid first started to escalate, Oliver became really concerned and anxious. At first he did not understand what the virus was, so by using storytelling and easy read resources, staff were able to give Oliver a better understanding of the virus and how he could keep safe.

“When the first lockdown was lifted, Oliver was still very anxious and was scared to leave Boldshaves Oast in case he caught coronavirus. Because he was too scared to go out, this of course affected his daily routine.  Oliver’s behaviour completely changed and the team were concerned for his mental wellbeing as he had reached crisis point.

“We reached out to Elaine – FitzRoy’s practice development lead – who came to the service and worked alongside Oliver and the Boldshaves team creating meaningful proactive strategies that work for Oliver.

Thanks to these strategies, fours weeks later, although Oliver still continues to be anxious and concerned about the virus, he is back to his normal self.

“The strategies we put in place included supporting Oliver in getting used to his new routine, we scheduled one to one activities and supported him to feel in control of situations. For instance, we used a clock to show him when his next activity would start or how long he had to use the kitchen. Oliver is supported to be actively involved in his home and learn new skills, such as sweeping our drive because he enjoys kicking the leaves out of the way. He also now has a bike, which he really enjoys going out on.

“The Boldshaves staff team are now able to support Oliver and meet his needs to the fullest, while also supporting him with any fears or anxiety using the proactive strategies we now have in place. I would like to say a big thank you to my team at Boldshaves and to Elaine for the great work we have achieved over the past few months to help support Oliver.”