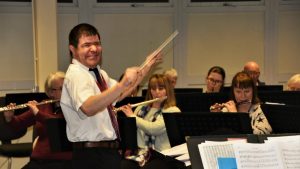 Ross has always had a passion for music, and after taking an interest in conducting, support workers Ilona and Heidi decided to create a memory he would never forget.

Ilona has supported Ross for over two years at one of FitzRoy’s Hampshire supported living services. She said: “Ross has always loved music, and classical music in particular. I decided to make him a stand and a baton and he really enjoys conducting along to pieces of music. He really loves it, and likes to perform in front of the mirror so he can see what he is doing.

“My sister Heidi also works for FitzRoy and we were talking one day and I said I wanted to try and organise something special for Ross where he can perform with a band. Heidi managed to organise for Ross to perform with the entire HMS Collingwood Royal Navy volunteer band – I was so excited to tell him! I couldn’t believe what a brilliant experience we had managed to pull together.

“Heidi and I took Ross there and helped him get ready, he looked so smart. Ross listened to the band warm up and get ready to play, and then he was invited up to take the stand to conduct the band. Everyone was so happy to see him up there. He conducted a really long song, it was so amazing.

To see him up there was quite emotional, it was completely a dream come true for Ross.

“Afterwards he could not stop smiling, he looked so professional on the stand and even tapped his conducting baton before he started. The moment he got called up and took the baton he was away. It was an amazing evening, we stayed to listen to the rest of the music after Ross’s piece. I think Ross was blown away.

“The band were so supportive and so brilliant, I especially want to thank Louise and Paul from HMS Collingwood who helped to organise it. If you have a chance to make someone’s dream come true, why wouldn’t you. I’m so happy that Heidi and I helped this happen for Ross.”

Keep Up To Date With More Heartwarming Stories Like Ross’