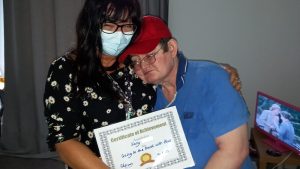 Sally has a phobia of going outside, and the team at Jellicoe Court in Hampshire have supported her to build up her confidence and trust. After months of hard work and dedication, Sally was supported to take her first trip out in more than two years.

Jellicoe Court is FitzRoy’s supported living service in Basingstoke, where the team supports 16 people to live independently in their own flats. Sally’s key support worker Alan said: “I am really passionate about helping the people we support achieve their goals and seeing progress, and since I started working with Sally at the end of last year I have seen a huge difference in her confidence. When I started supporting Sally she wouldn’t even let me into her flat, she was very nervous and would just stay in her room the entire time.

“With Sally it is all about building trust. In the months I have supported her she slowly started allowing me to come into her flat and she would even come and sit and have a coffee with me. It’s an incredible feeling when you can see the difference you are making. I feel it is because of the trust we have built that we managed to have such a huge breakthrough.

“Sally’s bank card hadn’t been working, it turned out it had expired and Sally hadn’t updated her address at the bank. It was something that had to be sorted in the bank, so I said to her ‘come on, lets go out and get this sorted’. I was really surprised when she agreed to come, and although she was nervous and kept almost turning back towards the house, I kept reassuring her and she got in the car.

“This was such a big deal for Sally, she hadn’t been out for years and she doesn’t have much experience going in a car. When we got to the shopping mall it was quite overwhelming but Sally did so well.

The woman at the bank was so helpful and when Sally got her new bank card she was so pleased with herself. I’m just so proud of her and I don’t think she even realises what she has actually achieved.

Service manager Christine said: “It took a long time to build up her trust, but slowly we got her to walk outside of her flat. Even then she would be so nervous she would be shaking. We very slowly built up the walk around the building, and then eventually she would have a coffee with me and now she comes out of her flat independently.

“It’s been a slow process, but because of the hard work and dedication of my team, and especially Alan, Sally has made her first trip out in years.

When Alan told me what Sally had achieved I got goosebumps, we are all so proud of her.

Alan said: “I told my managers about Sally’s achievement and the next day we gave her a certificate to congratulate her. We are all over the moon for her, we have such a great team that all works so well together, so when a resident achieves something,  we love to come together to recognise and celebrate them.

“Jellicoe is such an incredible place to work, everyone really cares about the people we support. I am genuinely passionate about improving their quality of life, and when you see someone like Sally achieving a goal like this I feel immense job satisfaction.”