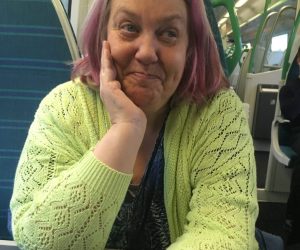 Sarah, who is supported by FitzRoy in Norfolk, decided that she would like a Paddington Bear. Not just any old Paddington though, she wanted to go on a special trip to London to get one from his original home, Paddington Station! Ginny Margison, Norfolk Support at Home Manager, told us about Sarah’s adventure.

When Sarah decided that she would like to go to Paddington station for her own Paddington Bear, we got to work on making plans. We had lots to think about like which member of staff Sarah would enjoy spending the day with, how they would get there, and how much would everything cost.

Gaynor, Support Worker, has supported Sarah for a long time, so she happily agreed to spend the day in London with her and help make all the arrangements. They went to the travel agents to see where the best place to catch a train from would be and work out the times they would go and come back.

Adventure day was finally here all their carefully laid plans came together. Everything went like clockwork and they had a fab time, returning home with a carefully chosen Paddington bear.

After a few initial worries about being in busy London, Sarah was very relaxed. She thoroughly enjoyed herself and spent the day smiling. Well done Gaynor for helping a dream come true.