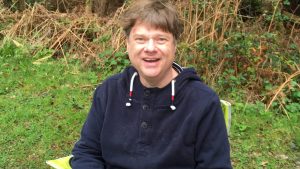 Rodney, who is supported by FitzRoy, took on a great challenge to raise money for a summerhouse for him and fellow residents at Whitegates View. Sylvia Malphus, Deputy Manager, told us all about it.

Rodney has done a few sponsored walks in the past and got a lot out of them so we thought another one was a great idea. He decided to walk 15 miles around Liss to raise money for a new summerhouse. Having a summerhouse would mean that everyone here would have an extra space to use when family or friends visit, meaning they wouldn’t all have to use the living room.

On the big day, Rodney set off with a member of staff for support, who just managed to keep up with him! Half way through the walk he stopped at the British Legion for a drink and many of the other residents were there to meet him to support and encourage him for the second half. Some people from Whitegates joined in for some of the walk but Rodney completed the whole 15 miles which was quite an achievement!

If you would like to raise money for FitzRoy, click here, call 01730 711 104, or email fundraising@fitzroy.org. We love hearing your fundraising ideas, and are always happy to help.