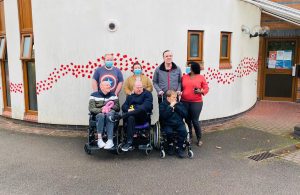 Shaun, who we support at Coleshill Road in Birmingham, decided that he wanted to mark Remembrance Day this year by creating something special. Shaun’s creative idea soon became a reality when everyone at the service pitched in to create a poppy display to remember those who had fallen in the Second World War.

Deputy manager Louise said: “We like to make sure we make big projects out of significant days of the year, such as Halloween or Christmas. It’s a great chance for the people we support to get involved and also means they’re doing different activities to keep lockdown exciting. When Remembrance Day approached, we knew we had to do something special, it’s such an important part of our history. Shaun, who we support, came up with the idea of making some poppies to put on display around our service.

“Before we knew it we were all making poppies, everyone we support in our services and all the staff – it was a full five day operation! Everyone pitched in, it was a brilliant project to be a part of.

“When I came back into work on Monday I couldn’t believe what I was seeing, the poppies we had made lined the whole way up towards our service, it looked so beautiful. Everyone was so impressed and Shaun was definitely pleased with how his idea turned out.”

“On Wednesday we had an afternoon tea to mark the day, which was also a great success. It’s so important for us to remember those who fought and died for us in the Second World War, and it’s something we always get the people we support involved in as it is a part of our history. I’m really proud of everyone for making such a wonderful thing to do to mark the day.

“Since lockdown began, it’s been difficult to get people motivated and to do something outside their normal routine, that has been our biggest challenge. We’ve made sure we think of different ways to get the people we support to go outside for walks, such as going at quieter times of the day, and also getting involved with big projects like this one. I’m really proud of how we’ve all pulled through this year.”