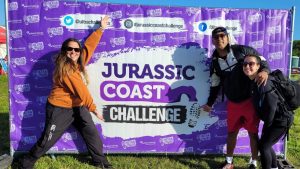 Hayley and Hazel took on the challenge of a lifetime last weekend when they hiked 58km across the Jurassic Coast, all to raise money for Love4Life, our friendship and dating network for autistic people and people with learning disabilities.

Hayley has been the manager of Love4Life for six years as the network has grown to supporting more than 200 members. Love4Life relies on fundraising to support even more people to make friends, learn new skills and find love! Hazel started as a volunteer two years ago and recently became our South Hampshire Love4Life network coordinator.

Hayley said: “I signed up for the Jurassic Coast challenge at the end of last year. My motivation has come from the growth of Love4Life, and the impact it has had on so many people’s lives. And as cheesy as it sounds, I have been on a journey with Love4Life members. They have had such an impact on me and my life that I wanted to give something back.

So with that in mind, I signed up and thought – let’s go for it!

Hayley said: “I felt fine leading up to the day, but the night before I was so nervous and thought ‘what am I doing?!’. Before we set off we were surrounded by people who were doing the challenge for all different charities, there were people with disabilities, people recovering from cancer – it was a heart warming and inspiring environment to be in.

“Love4Life members also surprised me with a lovely video wishing me luck which was so touching, I have had so much support through donations from friends and family of our members. I have been overwhelmed with the support and encouragement.

“We set off and 3km in my legs started hurting and I thought ‘I’m never going to make this!’. But we carried on going and we were feeling fairly positive as we reached the first check point at 25km. It was a beautiful day, very warm and it was all going really well until we hit the 42km mark. By this point we had been walking for 13 hours.

“It started to get dark and we were told by the marshals that rain was forecast, so the mood changed a lot for everyone. Once we got to Durdle Door there were four cliffs one after the other we had to climb. It was pitch black, people had started dropping out, and mentally this was the toughest part.

“Finally, we got to Weymouth. The last two kilometres were on hard ground rather than the trail we were used to. It was torture – my feet were in so much pain. What kept me going in these hardest moments was knowing I was doing it for Love4Life.

“It was really eye opening for me, I have always been one to say ‘I can’t do it’ when something gets too physically tough. But during the challenge I had no choice, I had to keep going. I really surprised myself.

When we got to 58km and I finally crossed the line, I burst into tears. I felt so overwhelmed by what I had achieved – and also so glad it was over!

“Although it was one of the toughest things I have ever done, I would still recommend it to people. It teaches you a lot of things about yourself, you really test how mentally strong you are in the hardest moments. But I would also recommend it to people because of the views – the surroundings you get to walk through are absolutely stunning!

“I have raised more than £700 for Love4Life which is amazing, I am so grateful to everyone who has supported me. I know first hand the difference donations make to Love4Life, it means we can continue to combat loneliness and isolation and support even more people to build friendships in a safe space.”

You Can Donate To Hayley’s Challenge Here.

Inspired by Hayley and Hazel’s trek across the Jurassic Coast?

You can take on your own challenge – whether you want to abseil down Portsmouth’s Spinnaker Tower, brave a wing walk or follow in Hayley’s footsteps and take on an Ultra challenge, take a look at what you can sign up for here.
Take part in an event