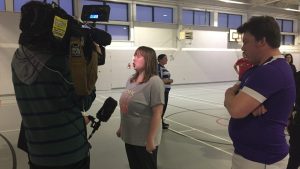 Lee, who owns Lee Davis Multisports, has had a visual impairment from birth, but that didn’t stop him from making a bold career move from IT to a sports coach just six years ago. On Tuesday, 25 February, ITV Meridian came along to one of Lee’s sports sessions with Love4Life members to talk about his work.

Lee said: “I became a sports coach a bit by accident, I got to the age of 35 after spending my whole working life in IT and I fancied a change in career. I have had a visual impairment from birth but have always had a love of sport, so I decided to take my disability and make it into a positive.

“I teach a whole range of sports: boxing, tennis, football,. cricket, table cricket, gymnastics and I teach ages from five to 55. I love the variety.

“It’s so rewarding coaching Love4Life, I know members getÂ  a lot from the sessions and that is brilliant. It’s not just the sports aspect that is important for them, it’s also about being social and making friends – it creates a real positive enjoyable atmosphere. I just want to give back as much as I can, really.”

Love4Life coordinator Hayley said: “Our members absolutely love sports, especially led by Lee. He’s a fantastic inspiration for people with learning disabilities to see not only can you have a disability and play sport, but you can coach other people with disabilities.

He’s a fantastic example of just being inspiring – our sessions used to be only two or three people, and now we have 20 and I believe that’s because of Lee’s enthusiasm and his drive to make this such a success.

“We think Lee is a fantastic coach because members find him exciting and passionate about sports, he gives them lots of understanding of various sports. It gives our members a great role model to look up to. It’s really important for members of Love4Life to take part in sport, not only to help their health and well-being but also so they can learn things like team skill and communication, as well as have fun.”

Lee’s Session With Love4Life Was Aired On ITV Meridian On 28 February And Can Be Caught Up With On Our Youtube Channel.