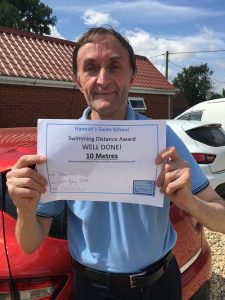 Stephen had always wanted to learn to swim and his support worker helped him achieve his dream.

Kim Hollins, from the Support at Home Norfolk team, said: “Stephen has been into a pool on holidays with his girlfriend Pam but has always stayed at the side reluctant to leave the security of the rail. He chatted to me about it and we arranged some swimming lessons.”

Kim found a small private pool and a coach that could teach Stephen the techniques he needed. With plenty of encouragement from Kim, and Stephen’s incredible perseverance, his confidence grew and he accomplished his goal of learning to swim.

Stephen was soon awarded a 10 metre certificate, but didn’t stop there. He carried on to achieve 25 metres â all in the space of three months! Stephen is very pleased with himself and enjoys trips to the pool with his girlfriend so much more now.

Kim said: “He continues his lessons which have given him great confidence and a new hobby as well as now being able to enjoy swimming with Pam.”

Ginny Margison, Manager of Support at Home Norfolk, said:
We are so proud of Stephen. He has picked up these skills so quickly and it’s so wonderful to see his confidence and independence flourish. A big thank you to Kim, his support worker, who has made this possible.â