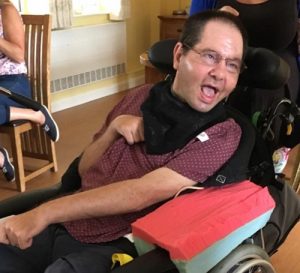 Stephen lived a life full of passion, laughter and fun. He had been living at FitzRoy’s registered care home The Pastures in Norfolk for seven years when he sadly passed away earlier this year at the age of 58.

With no close family remaining, it was down to The Pastures staff to made sure he had a send off that matched the way he lived. Stephen had a brain injury (ABI) as a result of a motorbike accident when he was 17. As he got older, Stephen’s health deteriorated and he needed to use a wheelchair but he still lived life the way he wanted, with fun and laughter.

“Stephen was not verbal but he understood what we were saying and he had a wicked sense of humour. He loved only Fools and Horses, and would really have a good laugh watching it – his favourite episode was the infamous chandelier episode. He was loved by all the staff here and an absolute joy to work with. As he got weaker, he had quite a few stays in hospital and developed pneumonia. After his final stay in hospital, he came home and passed away about four days later. We knew he could go at any time, so we made sure he was in his room, surrounded by all his things, with his key team around him. We played his music – Elvis and Rod Stewart were his favourites – and kept talking to him. When he finally passed away in the early hours, he was not alone.

“Despite the injuries he received in his accident, if motorbikes were on the TV he always wanted to watch and he loved looking at old photos of himself on a motorbike, he would have a huge grin on his face. He was so passionate and loved life and we really wanted his personality and passion to shine through at his funeral.

“I arranged for some kind volunteers of âBiker Escorts UK’ to escort Stephen from the funeral directors to the crematorium. He had an escort of 10 bikers who gave up their time to escort him on his final journey.

“His funeral was lovely. One of his old school friends gave a eulogy, it was wonderful to hear from him what Stephen was like as a young boy – and nice to hear he had always been cheeky!Â  We played Rod Stewart ‘Sailing’ and he was a big Spurs fan, so we played out with the Spurs chant, ‘Nice One, Cyril’.

“We held the wake for Stephen afterwards back at the Pastures where everyone who had got to know Stephen over the last few years attended.

“We really miss him at The Pastures, he was so loved by everyone. We are looking at ways to remember him, a rose bush in his memory and a concrete ornament in the shape of the reliant robin from Only Fools and Horses, which he would have found hilarious.”