Vince is 52 and lives in our Coventry supported living home, Tom Mann Close, and he’s been far more active since building a strong bond with his new support worker Nick.

Nick started at Tom Mann in spring 2022 and has really taken on board active support, making the most of every interaction, every opportunity, to help the people we support develop their independence. He’s got Vince cooking, shopping, bowling and lots of other things 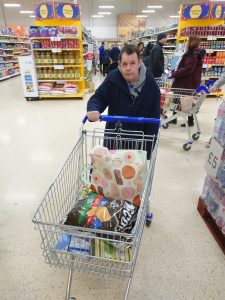 Service manager Sacha said: “It’s been a real breakthrough and great to see someone in their first job in care come in, really take it on board and develop such a great bond.

“Vince has severe epilepsy and has regular seizures and it can be hard to get him to do things but Nick just has a great way of encouraging him so he’s been so much more active in the last few months.

“Vince is a huge Man Utd fan, so now they are planning a trip to Old Trafford which is something I never thought I’d see.”

Deputy manager Lisa said “Vince is very strong willed and would often refuse to do anything with no way of talking him into it but Nick seems to have such a lovely way with him that he will do almost anything he suggests.

“Nick is the first male support worker Vince has had so maybe that’s played a part and goes to show that we’re all always learning about the people we support and that it pays to try new things.”