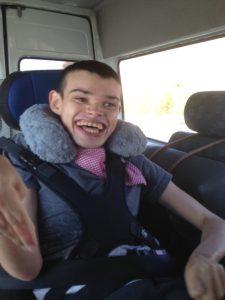 Callum, who lives at Whitegates View in Liss, hadn’t been able to go on holiday since he was a child due to his complex needs. So, with a huge amount of planning and preparation, staff pulled out all the stops to make what was thought impossible, possible. Sylvia Malphus, Deputy Manager, told us all about Callum’s journey to Spain with two Support Workers from Whitegates, Collette and Sandra.

When it was decided that Callum would be going on holiday for a week to Spain, there was a lot of things to plan to make it happen. Because of Callum’s needs, we had to have so many discussions with his doctors, the airline, and the apartment owners. We had to ensure he would be safe on his flight and have everything he needed whilst he was in Spain.

Callum has epilepsy so sometimes, if his seizures last a long time, he needs oxygen. This isn’t a problem at home, but his oxygen tanks are too big and heavy to take on a plane. After long discussions with the airline and the people who owned the apartment he would be staying at in Spain, it was agreed that we would buy a nebuliser for him to take on the plane. This took a lot of organising because although he could take the nebuliser, he wasn’t allowed to use it on the plane. This meant he would have to use the plane’s oxygen if he needed it. We also had to make sure that we bought the right oxygen, as there is a certain type that is allowed on a plane, which was really tricky.

Callum uses a wheelchair because he has cerebral palsy. His wheelchair would need to go in the hold with his luggage, which had to be measured and weighed here so that the airline would take it.

Because of his dysphasia, Callum has to have all of his food blended so there are no lumps. The food processor he uses at home is quite big, so we bought a new, smaller one for when he went out for meals in Spain  and because of the weight allowance on the luggage.

The apartment we arranged for him to stay at specialises in holidays for people with learning and physical disabilities. They provided a profiling bed, hoists, an adapted bath, a beech wheelchair and disabled access into the swimming pool.

When everything was finally set, Callum bought lots of new clothes for his holiday and a new suitcase. Everything was packed and ready to go, so Callum, Collette, and Sandra set off for Spain!

The airline was great in England, and upgraded their seats so there was loads of leg room! Their flight went well, and all three made it safely to Spain. The lady who owned the apartment picked them up from the airport in her wheelchair adapted car and Callum giggled and danced in the car all the way to apartment.

The apartment was amazing! They had a pool which they had mostly to themselves and were right opposite the beach. Because the apartment provided a beach wheelchair, Callum could go across the beach and right up to the sea! He loved the music at the bars, the late nights, the walks, and all the pretty lights around Spain. He also found a taste for Spanish food which he ate a lot of along with ice cream.

Callum hasn’t been on holiday since he was a child as his parents didn’t think it was possible due to his disabilities and the amount of support he needs. They were over the moon when we told them that we could make it happen!

There are so many more things to consider than you first think but I honestly cannot give enough credit to Collette and Sandra. They both did an amazing job with organising the holiday and helping Callum to have a great time out there. They put in so much time and effort. They thought of everything, from finding the apartment and flights to helping him pick out new clothes and making sure he had everything he needed for the week. They deserve all of the credit, and I can’t thank them enough.

Callum had such a great time which was lovely to see. It was such a success that I’m sure we’ll be booking another holiday for him soon!”