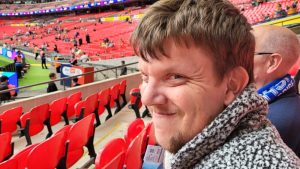 Our Notts Support at Home team have been supporting Aron for about a year now. He recently went on a surprise trip to watch his team play at Wembley, and we spoke to Aron to find out a bit more.

Aron said: “I went to Wembley with my cousin Kriss who only lives some doors down from where my family are. I had been going to watch Mansfield Town play for a while and they made it to the play off final. My cousin didn’t tell me that he was ordering tickets for Wembley, so it was a surprise for me.

My father took us down to London to watch them play at Wembley and it was an experience that I won’t forget for a long time.

Mansfield ended up losing 3-0 to Port Vale but Aron still says he had a great time!

Aron has been supported by FitzRoy for about a year now, and during that time FitzRoy deputy manager Nicola has worked with Aron, his social worker and the council to move Aron out of shared accommodation in Worksop and into his own flat, closer to his family in Ollerton. He now receives six hours of support from FitzRoy over two days each week, where we support him to maintain his home, finances and wellbeing.

Nicola said: “Aron has really come on this year, when we first met him, he was quite anxious and would perhaps accept things he wasn’t really happy with, so as not to make a fuss.

He’s now much more confident and is able to advocate for himself more. He enjoys speaking to people, and moving closer to his family has really helped their relationship

“I spoke with his social worker the other day who said she has never known him to be so settled. He is such an active part of the local community now, he really is amazing and is an amazing advocate for people with disabilities.”

Aron now works front of house three days a week in a café set up by the local church and has been involved in local festival OneFest – a week-long arts and culture festival held across Mansfield and Ashfield that has the primary aim of smashing the stigma and segregation people with learning disabilities and autistic people face in society.