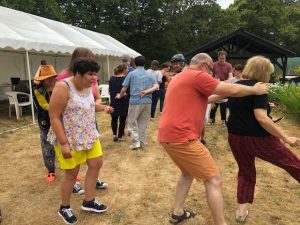 Boldshaves Oast, FitzRoy’s residential service in Kent, hosted its hugely popular activity week again in July. Due to the success and fun that they had at last year’s event, they’ve made the week an annual tradition.

The week was packed with activities specifically aimed at helping the people we support develop confidence and broaden their experiences.  From orienteering sessions in the beautiful Kent countryside and beach combing for shells during a trip to Rye to bunting and flag making and holistic therapies such as yoga and Indian head massages, the residents had an amazing week. They were also able to enjoy a visit from some exotic creatures including tarantulas, giant snails and giant millipedes thanks to Zoolab, who run animal handling workshops.

On the final evening of the activity week, friends and family of Boldshaves Oast and neighbouring residential service The Croft were invited to join staff and residents for an evening of food and entertainment. The evening embraced arts and crafts, cookery, dancing and live music. The highlight of the night was the grand finale – all 14 residents sang and performed a choreographed dance routine of Grease’s Summer Nights’ and Greased Lightning’. They were met with a standing ovation from the audience, who enjoyed it just as much as they did!

With generous donations from guests, the evening raised over £300, which will pay for new washable flooring for Boldshaves Oast’s art room.

The activity week takes a lot of preparation – which kicked off at the start of the year – and was primarily organised by Boldshaves Oast Arts and Crafts Therapist Tracy Carr, with help from Chris Hill (woodwork), Tim Fellowes (music) and Tracy Davison (horticulture). Volunteers also gave their time, with Ashleigh rehearsing song and dance routines and Hayden helping with props and preparation.

Justine May, Service Manager at Boldshaves Oast, said:
The theme was inclusion and seeing the person, which is a very important part of our daily lives at FitzRoy Leo Trust. It was about teamwork and all of us spending real quality time together in the great outdoors, enjoying new experiences and achieving personal goals. We also wanted to show our families and friends how grateful we truly are for their continued efforts in supporting us. Not just with fundraising, but in the many kind gestures they show us.