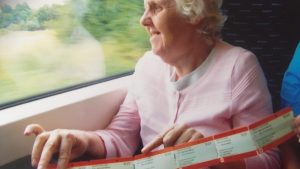 Before Chrissie moved into FitzRoy Supported Living in Suffolk, her access to the community was limited and not very frequent. Beverley Hayes, Suffolk Supported Living Deputy Manager, told us how her team helped to open the doors of possibility for Chrissie.

When Chrissie came to us she had lost the confidence to go out and about. Because of this, she found it difficult to leave the house and try new things. However, over the years that she has lived with FitzRoy, she’s come on leaps and bounds.

Chrissie is now a different person. One step at a time, our staff team have worked tirelessly to help build Chrissie’s confidence and trust in them so that she feels safe going out. She now goes to an evening club with a disco which she absolutely loves, as well as a lunch club.

We also started taking Chrissie out in a staff car, but this meant that she could only go out with a member of staff that could drive. We have now started to try public transport so she isn’t restricted. Recently we supported her to go on the train for the first time which was a total success!

Chrissie now has freedom and choice to do so much more than she could before. She is broadening her horizons with every outing, and is experiencing new things all the time. Chrissie now looks forward to going out, and her confidence is positively soaring. All of this wouldn’t have been possible without the great support of her dedicated staff teamâ