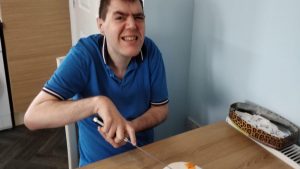 We have all missed being able to hug our friends and family during the pandemic, which makes it all the more special that we are able to have that closeness once again. Chris, who lives in his own home in our supported living service in Cambridgeshire, was overjoyed that he was able to hug his mum again for the first time in 15 months.

Burberry Close deputy manager Liz said: “Chris has struggled during lockdown because he’s a very tactile person, so he has missed out on that human contact, but the other day his mum came to visit and they hugged for the first time since before lockdown. I think it did them both the world of good.”

Pearl, Chris’ mum, said: “It has been hard over lockdown not seeing Chris as much, and losing that physical contact. Chris would normally come and hug me while we were catching up and chatting, so missing out on that has been difficult for both of us.

“Last week I came to visit Chris in his garden, and for the first time in 15 months I was able to give him a hug.

I said to him ‘guess what – it’s hug day!’ and we had a massive hug, it was lovely. I don’t think Chris expected to be able to hug me, it felt really special after such a long time.

Supporting people to live as independently as possible to lead the life they choose is at the heart of what we do at FitzRoy, and Chris has just celebrated nine years of living in his own home. Liz said: “Chris moved into his own home nine years ago after living with his mum his whole life. It was a big change for him and it was a difficult transition but Chris has come on leaps and bounds in the time that he has lived in his own place. Now he loves having his own independence and control over his space. His home is really his safe haven.

“Chris is a really social person, before coronavirus he would love to go out to groups and clubs very regularly, which he misses but can’t wait to get back to. He’s really big part of the community. He also loves being able to go and see his mum and also inviting her into his home – he’s really proud of his home.

“This month Chris celebrated nine years of living in his own home, and his mum brought him a cake like she does every year to mark the occasion.”

I liked being able to cut my cake to celebrate being in my home for nine years. I love my kitchen and my bedroom the most.

Pearl said: “I love seeing Chris love his home – he chooses what he wants to do and when he wants to do it. In normal times I will come and visit Chris twice a week and it just works so well for him. In the nine years he has been in his home he has become so much more grown up and independent.”