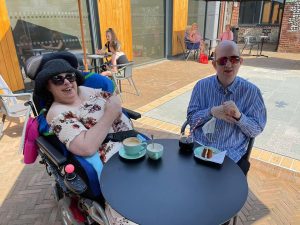 A huge congratulations to Christian and Debbie, who recently got engaged just six months after their first date!

Christian and Debbie have been attending our On Track day service in Hampshire for two years, but since their first date last July, their friendship has blossomed into love.

Jody our On Track support worker, knew that Christian was looking for love. She introduced him to another member at On Track, but it didn’t work out. Jody then suggested that Christian ask out Debbie. They felt an instant connection and we supported Christian and Debbie on their first date – coffee and cake at the Petersfield Museum Café. Their relationship developed beautifully and the two of them became inseparable.

After six months of dating, Christian decided he wanted to spend the rest of his life with Debbie. He told us he wanted to propose to Debbie during On Track’s Christmas lunch celebration. We supported Christian to pick out the ring, showing him different options online.

When the time came, Christian popped the question and Debbie overjoyed! And she said yes!

At FitzRoy we firmly believe that everyone deserves love!

For people with learning disabilities, finding love, building relationships or making friends can be so much more difficult as their opportunities for socialising and meeting new people can be very limited.

After their first date, Christian and Debbie continued seeing each other at On Track, but they wanted to go out on another date. So support worker Erika joined forces with Jody to turn On Track into a restaurant where Erika was the chef and Jody was the waitress. Christian and Debbie chose the menu – a vegetable lasagne for their main meal and a chocolate pudding for dessert. Christian dressed up in a suit and brought Debbie flowers for their special dinner. 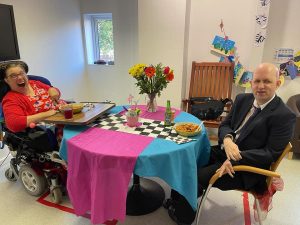 Debbie and Christian at our On Track restaurant

It’s been great to see their love blossoming over the last six months. Good luck to them both from everyone at FitzRoy!