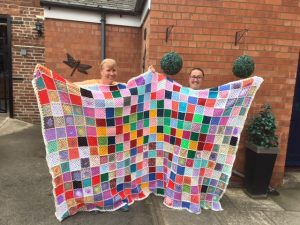 Charlie has not only found a sense of joy and pride in making her beautiful crochet blankets, she has also found a way to her improve her anxiety.

We spoke to support worker Cheryl Dodds, who has been supporting Charlie in Nottingham ever since she started working for FitzRoy three years ago. She said: âThe first time I met Charlie she proudly showed me her dog’s blanket that she had crocheted a while before. She said she would like to learn other patterns but needed support with this. I had not crocheted for 20 years, so I bought some hooks and relearned, starting with granny squares.

Charlie picked up the pattern very quickly and soon there was no stopping her, she became really confident about her abilities, which was having a really positive effect.

âShe became a familiar sight at the monthly FitzRoy coffee mornings with her crochet. Everyone encouraged her, she had lots of donations of wool, including some from other people we support. I also crocheted squares in my free time until eventually we made a very large and colourful blanket which Charlie proudly donated for the raffle at our FitzRoy Christmas party.â

Charlie’s crochet skills have been such a hit, she’s even donated some blankets to the volunteer unit at Kings Mill Hospital in Nottingham.

Cheryl added: âCharlie has since learned more patterns, including Christmas stockings and a more complex pattern for a ripple blanket, she has now made many of these. I think most of her friends and family are now proud owners of one of her lovely blankets.

âCharlie gets really excited when she starts a new crochet pattern, it’s given her a real sense of pride in her work. It has also really given her something to focus on and has helped massively with her anxiety.

“Charlie has now chosen a beautiful, new, even more complex pattern which we are about to embark on!â

Do you want to help support people like Charlie? Click here to find out how you can transform lives.Â