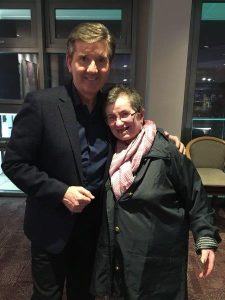 Brigette, a resident at a FitzRoy residential care home in Norwich and lifelong Daniel O’Donnell fan, had the night of her life attending his concert.

She was delighted when she received tickets for her birthday. However, this isn’t the first time Brigette has seen her idol. After being so upset when tickets were sold out last year for his concert, Brigette’s sister managed to arrange for him to surprise Brigette at her home and cheer her up.

Brigette has been so excited since she got the tickets. She really loves Daniel O’Donnell. She has all of his CDs and DVDs which she watches and listens to almost every day.

She was so disappointed when she couldn’t get tickets to his concert last year, so when he surprised her by turning up on the doorstep she was absolutely over the moon. He spent a good hour with her and chatting away to all of the people we support in the garden. It was an experience she will never forget.

Brigette went to the concert with a support worker and had a brilliant time singing away to all her favourite songs. At the end of the night, Brigette and her support worker waited by the stage door to see if they could get a glimpse of her idol. As he came out the door he instantly recognised her from the year before and said hello.

Brigette was delighted and Daniel took some time to chat to her which was lovely. She was buzzing when she came home and couldn’t wait to tell everyone about it and show us photos the next day.

It is especially fantastic to see Brigette so happy, as she went through quite a tough time a few years ago when she moved in with us. Brigette came to us very poorly and had lost a lot of her mobility. Now she is on the mend and is starting to get her life back. She has started to be able to walk unaided and she has even signed up to volunteer for a few days a week at an animal sanctuary which she adores.

Her life is now full of great friends and she seems really settled which has meant she has come out of herself. Seeing Daniel O’Donnell live just made her year even better!â

What a wonderful story of a dream come true for Brigette.