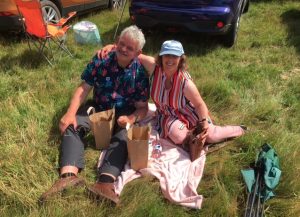 Debbie and Steven met in 2013 when Debbie held a Valentine’s party. They have been together ever since and are now engaged. They spend every weekend together, taking it in turns to stay at each other’s home in Fakenham and Dereham.

We support 34 people so they can stay living in their own homes, and we’re always looking for opportunities for them to socialise together, so they can meet new people and build friendships in a safe and supportive environment.

“We were delighted when Debbie said she wanted to hold a Valentine’s party for everyone, especially when she really hit it off with Steven. So it was wonderful to be able to support them to have their first holiday together.”

For the past three years or so Debbie and Steven had been wanting to go away together but due to the pandemic it hadn’t been possible. However, last year we supported the couple to book a four night stay at a caravan park they had chosen in nearby Hunstanton, and they finally took their trip at the start of July.

They’ve really helped each other develop more independence. They spend their weekends together and so we supported them to achieve their dream holiday together as their next step to increasing their independence.

“One of our support workers drove them to the park and supported them to settle in. After that we dropped in on them every other day but apart from that they were on their own and coped brilliantly.

“They went to the clubhouse every evening and enjoyed the entertainment. On their first night they took a wrong turning to their caravan, but they said it was fine as they just asked someone and they helped show them the way. It was a great opportunity for them to build their confidence and develop more independence.

“The fact that it was in a new place that they didn’t know – it was wonderful that they achieved their goal and I’m so proud of them both.”

And as for Debbie and Steven, they’re already planning for next year. Debbie said: “Can we go for longer, seven nights instead of four?”