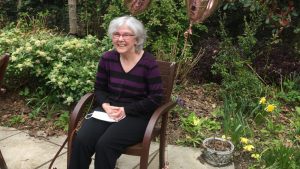 The dedication of our staff never goes unnoticed, and after celebrating 50 years of working at FitzRoy, Debbie shared with us some of her highlights, what she loves about her job, and the changes she has seen over the five decades.

Working at our first ever service, Donec Mews in Hampshire, Debbie met both our founder, Elizabeth FitzRoy, and cared for her son, Michael.

Debbie said: “I began working at FitzRoy when I was just 15 – my teacher spoke to me about a potential job there and took me to the service to speak to Sissy, who ran it. The next day I began my first job, and 50 years on I still love it.

“At that time Donec was a service for children with learning disabilities – the youngest we had was two and a half. Elizabeth FitzRoy would often come to the service for meetings and we would care for Michael – although Michael would look after himself! He would love the drums and would often sit and write out cards to people.

“I have so many great highlights from working at FitzRoy, one of them being when I supported a resident to go and see his family in Australia. His parents had died and the only close family he had lived there, so that was wonderful to see him connect with them. I’ve had loads of great moments from supporting our residents on holiday, you see a different side to them when they’re enjoying the sun or getting dressed up for dinner.

It’s hard to put into words what has motivated me to stay at FitzRoy for 50 years. I love working with the people we support, it really is all down to them. The connection you make with them and the difference you are making is the real delight of the job.

“It is lovely to know you have been recognised and people are so grateful for the years you have dedicated, but to me it just feels like I’ve done my job, and everyone else who works for FitzRoy is just doing the same thing I’m doing.”

Service manager Karen said: “Debbie is a fountain of knowledge and a pillar of strength at Donec Mews, having worked here for five decades she has so much insight and understanding that you wouldn’t be able to find in anyone else.

“I have worked with Debbie for 20 years, and I know that for both our staff and the people we support she brings a sense of calm, she keeps her head down and gets on with the job at hand but is always there if you need to talk.

“Debbie has adjusted to so much change during her career. When she began, her job was to keep the front step clean and to wash the children’s faces, there was no such thing as care plans. She’s adapted throughout the years, and the people we support have grown and changed with her, it’d wonderful to see.

“Saying thank you doesn’t seem like enough after Debbie has dedicated 50 years of her life to FitzRoy. But we do want to say thank you Debbie, your hard work has been recognised and our team wouldn’t be the same without you.”