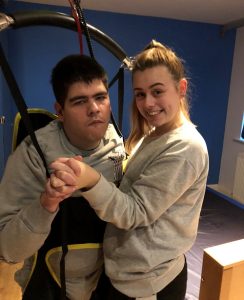 After Dillon had an epileptic seizure at the age of five, his mum was told he would never walk again. Dillon hasn’t taken a step for more than 20 years. But now, at the age of 26, that has all changed!

Nottingham Supported Living Service support worker Abi Gascoigne said: “We were looking at ways to improve Dillon’s mobility. We have another resident Cathryn, who uses a walking jacket (a supportive harness), so we asked the local physiotherapy team whether we could have one for Dillon. We thought it would help him build up his muscle strength and become more mobile. But we never expected that he would achieve so much.”

“Dillon got his walking jacket in November and was frightened at first, so we started slowly, reassuring him, building his trust until he felt ready to put the jacket on. Then we supported him to sit up on the side of his bed, so he could get used to it. He was wary about standing, but after a couple of weeks, he’d gained enough confidence to try it.

“Now his confidence is increasing all the time and he gets excited about using the jacket. And something really wonderful happened last week that amazed us all. Dillon managed to take his first steps in 20 years! We got straight on the phone to his mum, who came over and saw him take four steps. It was very emotional.  He screams with laughter and excitement now, and we’ve even had a dance. It would be lovely if he could use the jacket to walk to his kitchen and make himself a drink, something that we never dreamed he would have been able to do. Dillon has worked so hard and surpassed everyone’s expectations. The physiotherapy team are amazed with what he has managed to achieve in just over two months. It really feels like he now has the opportunity to meet his full potential.”

Deputy Manager Emily Priestley said: “The staff team have been absolutely incredible. I am so unbelievably proud of everything they’ve done, I am speechless about their achievements with Dillon.”