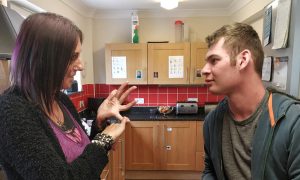 FitzRoy is launching a Makaton Champion scheme to help our staff communicate meaningfully and effectively with the people we support.

Makaton is a vocabulary of signs and symbols that enables people with limited or no speech to communicate with others. The signs are used alongside speech in spoken word order and can help people to make their needs and wishes known and respond and interact with others.

FitzRoy will help 16 support staff across the organisation to become Makaton Champions who can share their new skills and knowledge with the rest of the support staff they work with. The aim is for all staff to increase their experience and expertise in different forms of communication.

Alex Jenkins, who lives at our Pinewood service in Hampshire, relies heavily on Makaton and pictures to communicate with others. Before Alex moved to Pinewood in June, the staff team undertook an introduction to Makaton signing session, which provided them with the essential skills they need to communicate with him. Alex can now freely express his choices, thoughts and feelings to staff, enabling them to better understand his needs.

“Before Alex came to Pinewood we hadn’t used Makaton, but he has given us the opportunity to learn new skills. The bespoke training has made it much easier for us to interact with him and, without it, his transition to his new home would have been much more difficult. The team love working with Alex and he has given us a new perspective on how we can communicate with each other.”

“Providing staff with the skills they need to confidently use Makaton will make an enormous difference to the people we support, enabling them to express how we can support them to live as independently as possible. We encourage our staff to develop their skills so that they are really able to ‘see the person’, not the disability.”

The Makaton Champion role is due to launch at the end of September 2018 and FitzRoy intend to develop a new group of Champions every year.