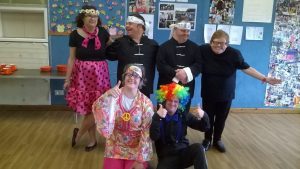 FitzRoy Day and Community centre in Petersfield Hampshire, On Track, are famous for their fantastic drama group. Recently some of the members were asked to perform at a drop in club for the over 60’s run by Brendoncare.

Erica, Support Worker and leader of the Drama Group, told us more.

Everyone got changed into their costumes and had a short rehearsal before we all excitedly hopped on the minibus to the Brendoncare club in Petersfield.

The club members were gathered in anticipation for the performance, and were all really welcoming. One by one On Track members took the stage to perform their pieces. These included a Bruno Mars number, ‘Let it Go’ from Frozen, ‘Kung Foo Fighting’, and ‘I am What I am’. Everyone performed their hearts out and did brilliantly.

The highlight of the show came in the form of the final number, âSomewhere over the Rainbow’ in Makaton sign language. The audience absolutely loved it, and were all smiling and happily singing along.

For me seeing members of On Track drama group performing and enjoying themselves, is the best buzz in the world. The pride everyone feels when they’re in front of an audience is plain to see, and it’s priceless.