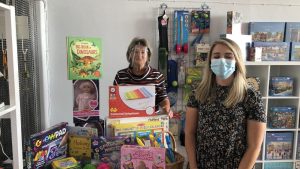 Service manager Louise is ‘over the moon’ after her service received a surprise £500 donation from a kind-hearted local businesswoman. 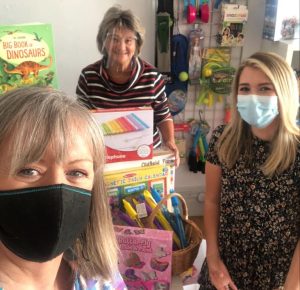 Last month, due to rising local cases of coronavirus, Worcestershire care homes were asked to restrict visitors to essential visitors only, and the people we support at our registered care services Dalvington and The Oaks had to cancel their long-awaited holiday to Wales.

Knowing the service was devastated by the news, Anneka – the sister of Trudie, who we support at Dalvington – decided to appeal for games and activities on Facebook. What she didn’t expect from her social media post was a donation of £500 for her sister’s service.

We spoke to Anneka, who said: “I was feeling really sorry for my sister Trudie and all of the residents at Dalvington. Things were just beginning to lighten up for the residents, a few were beginning to see family again from a distance and they had a holiday coming up that they were so excited for, it was a really big deal for them.

“I put a message out on Facebook asking for items that would help keep the residents entertained and would cheer them up through such a difficult time, and people were so generous. A lot of people said they hadn’t thought about the effect of coronavirus on people with learning disabilities but it made them realise how difficult it must be.

“I then got a message from a woman called Melanie who runs a local business, Melton Group. She said she wanted to help and make a donation of £500 and go shopping with me to spend the money on items I think the service would like. I couldn’t believe it, I was so overwhelmed and shocked, I cried!”

“We went out together and bought toys and sensory items, all from local shops to support our community. Melanie was so generous I still can’t quite believe it. I remember her saying ‘if I can’t help people in my local community then what am I running a business for’.”

Service manager Louise said she couldn’t believe the news when Anneka called her. She said: “I was over the moon when we found out about the donation – I was expected a few games but nothing like that. Anneka was in tears she was so happy, her reaction made my day.

“Going into lockdown in March was hard enough, but only last month families were beginning to visit in the garden again and we had things to look forward to. When we were told Worcestershire care homes would have to go into lockdown again it was a real blow to everyone. This donation was just the boost everyone needed. It has really got people motivated again.

“I can’t thank Melanie enough, it’s so lovely to know there are some truly generous kind-hearted people in this world.”

Melanie said: “Melton prides itself on having a caring culture and seeing people not disability first so, when I saw Anneka’s plea on Facebook I had to act. We sometimes forget just how many people this pandemic has significantly affected and it’s a testament to our local community in Malvern that when I acted and contacted other business owners; Jenny from Barnards Green Post Office and Pam from Heidi’s Treasure Trove, they wanted to help too.”