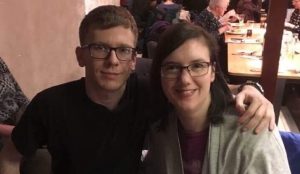 Matthew, 23, who has autism, has been a member of Love4Life for just over a year and his life has been transformed. Matthew’s parents told us about his journey.

Before Love4Life Matthew was reclusive. He was close to his family, but at college he was alienated because people didn’t understand him, and he didn’t understand the things he needed to do socially. He was therefore very happy when he met some new people. They befriended him and he trusted them. But all was not as it seemed. When they had no money to pay for their outings, Matthew would happily say oh ok! It turned out they were pretending to be his friend for his money. It was abuse and it was wrong. As his parents, we were desperately worried.

Finding Love4Life was a good way for us to get Matthew away from these people, and broaden his horizons. His world was too small, and we wanted to open opportunities up for him. The change in him since joining Love4Life has been phenomenal. He used to find holding conversations difficult. He would enter a room with people in and say âhi’ and then leave. Now he’s learning how to read body language and situations. His work colleagues have noticed he is more confident being his own person. Even something as small as deciding what to have for dinner was hard. But now he’s a lot more decisive and happy, he bounces around the house.

Matthew has always wanted to have a girlfriend, a job, a place of his own, and one day marriage and children. He has a life plan, and says, âWhy should I be different from anybody else?’. Meeting Grace has been a huge turning point for Matthew. They are well suited, and they understand and comfort each other if they are feeling anxious or self-conscious. They bring the best out in each other, and they are learning how to be caring which is so important in life.

Without Love4Life Matthew would not have had the opportunity to have a girlfriend, and meet a group of people, many of whom have become true friends. It’s given him a new lease of life. Matthew now copes with change better; he thinks more before he reacts. He used to get into a bit of a panic if plans changed at the last minute but he has learnt to step back and weigh up a situation.

I am surprised how little there is out there for young adults with disabilities, even just friendship groups. It is such a shame. Love4Life has been amazing. He’s taken on new challenges and is looking forward to a future of independence.