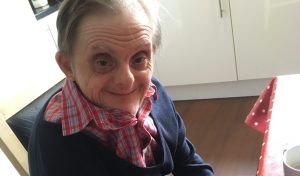 Crispin, who has Down’s Syndrome and Alzheimer’s disease, has lived at Dalvington and the Oaks, our care home in Malvern, for 47 years.

Crispin loves to chat to his family on his iPad, watch old comedies, go out for meals, go on day trips and especially enjoys looking at old photos with staff who have supported him for so many years, making sure that every moment matters.

We are like a big family at Dalvington, and our staff are always going above and beyond for the people we support. Recently, Crispin broke his knee during a seizure resulting in the need to stay in hospital.  Support worker Kelly knew that being in hospital around strangers would be very upsetting for Crispin, especially as he can’t communicate verbally, so she stayed with him for six nights, even sleeping on the floor by his bed, to make sure she was there to reassure him, support him to get the treatment he needed and explain what was going to happen. Other members of the team stepped in too, to allow Kelly a break.

Crispin is now on the long and slow road to recovery. Last week, deputies Karen and Rosie were able to support Crispin for a long-awaited reunion with his mum, Carole who is no longer able to travel to Malvern. The team are also planning a second visit there for his birthday in November.

“The amount of love and care everyone showed Crispin was unbelievable, especially Kelly, who offered to stay and support Crispin in hospital, not wanting to leave him with strangers. She kept his mum and us updated, and would Facetime us so we could chat to him. When we were told he could come home a couple of weeks later, with only a couple of hours notice, everyone pulled together to get everything perfect for his return, I’m lucky to have such a fantastic team.”