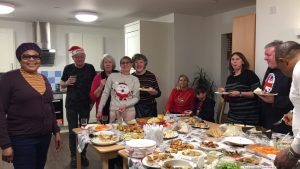 Eleven people we support have had their Christmas wish come true’ after they moved into their brand-new home in Teddington – just in time for Christmas.

After ten years of work, the people we support finally made the big move from Silver Birches in Richmond into their new state-of-the art home and they couldn’t be happier.

Service Manager Kim said: “Staff have worked tirelessly to make sure the move is as smooth as possible. We are really proud of them. It’s not taken long for our new house to feel like a home.

“All the people we support chose the colours for their new rooms and went out with their families to choose new furniture or bring furniture they already had. It was important that they all brought things into their new home that were familiar to them.

It’s been a lovely time of year to move, the surrounding area feels really festive and each flat has been out to buy their own Christmas tree for their living rooms. We even held our first Christmas party in our new home not long after we moved!

Having everyone settled in their new home before Christmas has been a wish come true.

We have noticed a big difference in the people we support since moving here. Adam’s family have said how much more active he is when he’s at home, and he’s been communicating a lot more. The other day he said my name for the first time!”

And the team have some big changes for the garden planned, too.

Deputy Manager Karen said: “The garden is such a lovely big space; there’s so much we can do with it.

“We want to build a summer house so people can have a chill out space to relax when they might want their own time, but it could also be a nice space to use for our family meetings.

“We also plan to have the middle of the garden as a communal space with benches for summer BBQs. We even thought we could plant our own Christmas tree by next Christmas.

“It’s about the people we support being able to do what they want. They do activities that they are all involved in, but sometimes they might want to go and watch a film in the summer house with their support worker or watch the wildlife in the garden. It’s about giving them the option to do those things.

“The staff have really pulled out all of the stops. They made sure that every step along the way, the routine of the people we support wasn’t disrupted too much and everything stayed as normal as possible. I’m really proud of all of them.”