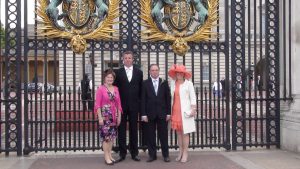 Maureen Clark began her journey at FitzRoy 43 years ago, after knocking on the door at one of our services asking for a cleaning job. After finding her passion and working her way up to becoming a service manager, Maureen reflects on her exciting career as she gets ready to retire.

“My journey all started when I went to Whitegates View in Liss one day and asked if they had a cleaning job. They invited me in and showed me around, then asked if I wanted to start on the Monday! I was thrilled, it was an ideal job. We had 18 residents who were all children at the time, from the age of four years old. Elizabeth FitzRoy was living in the coach house next door with her son Michael, it was really quite amazing.

“Once my children grew up a bit I took on doing the cooking for all the residents and the staff – sometimes it would be for 32 people. I don’t know how I did it when I look back – the saucepans were huge! I amaze myself with what I did, it was hard work but a lovely job.

“I worked as a cleaner and a cook for around 20 years, until one day they asked me if I wanted to go onto the care team. I was really nervous but I had learned quite a lot from the support workers after being in the background for so long.

“Straight away I felt like I was good at teaching the people we support independent living skills like cooking. I worked with Caroline O’Brien (currently deputy manager at one of our Hampshire supported living services) a lot because she was the unit leader, and she taught me so much – including how to drive the mini bus! Caroline and I used to take all 10 people out to the New Forest on the weekends with a picnic, we would have such good fun it would always be a weekend full of laughter.

I then took over as unit leader, which I really enjoyed. The bit I loved the most about my job was managing the teams. I felt like people were always saying ‘you’re doing such a good job’, but it wasn’t me, it was us as a team.

“While I was a unit leader, care standards changed and I was assessed to become a registered manager. I loved the fact I was going to be recognised as an actual manager, FitzRoy has always been brilliant at recognising what you contribute.

“It’s been such a lovely journey. I knew when I was ready to give up the manager role, and around nine years ago I stepped back and worked as a support worker part time. I just support one person in Petersfield now, who will be moving into our Hampshire supported living service soon.

“When people ask me why I have worked at FitzRoy for 43 years I have to say it’s because of the variety. I worked six different roles during my time.

It was always interesting and I was always encouraged by FitzRoy throughout my whole career. The training I received was brilliant, I never needed to go anywhere else, I was just so motivated and excited by my job.

“One of my highlights has to be supporting people to go and sign their own tenancy agreements. Helping them move and become part of their community was just wonderful to see. Seeing them being handed the keys to their own front door – those were some of my favourite moments.

“Another favourite memory of mine was receiving an invitation to attend a Buckingham Palace garden party with FitzRoy’s chief executive, Anna Galliford. The whole day was such a joy, I feel so incredibly lucky to have gone. It will be a memory I won’t ever forget.

“I am so lucky to still love my job right up to when I start my retirement. I never would have dreamed I would have achieved as much as I have in my career, and that is all because of the encouragement and support I got from FitzRoy.”

Anna Galliford, chief executive of FitzRoy, said: “Maureen has always âseen the person’ in everyone she has worked with over the decades.

“I was very privileged that in 2011 Maureen joined us to attend the Royal Garden Party in Buckingham Palace, a very special occasion but made even more special by the company of people who truly gave their âall’ to those less fortunate themselves. It was a memory box moment that I will always treasure.”