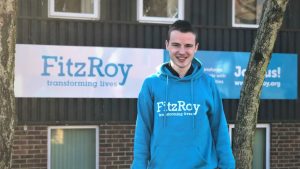 Chris has worked at FitzRoy for four years as IT Project Support, after completing an IT apprenticeship with us. Speaking about his experience as an apprentice, Chris said: “You often need some experience to go into an IT profession so I knew I wouldn’t just walk into a job straight from college. I weighed up my options and decided to go down the apprenticeship route.

“I was interviewed by the apprenticeship company and they put me forward for suitable apprenticeships. I decided to take the apprenticeship at FitzRoy because there was technology here that I wouldn’t have worked with otherwise – such as the specialist technology our services use to support people. I wanted to get a sense for everything in the IT department and get as much experience as possible, which is what FitzRoy offered me. They supported me with my learning and made sure I had everything I needed to complete the course.

“I wanted to stay after I finished my apprenticeship because I liked how I was trusted with a number of responsibilities so quickly; I feel like that helped me develop.

I also loved the values of FitzRoy – it feels worthwhile working somewhere that is such a brilliant cause.

“I would definitely recommend an apprenticeship â it gives you that first stepping stone earlier than if you went to university. I started as an apprentice but now I have a career.”

Tom started his apprenticeship at FitzRoy in November last year. He said: “When I started my second year at college, I began thinking about what I wanted to do after. I was tempted by university, but I wanted to gain workplace experience rather than just theory-based knowledge. It just seemed to suit my style of learning.

When I saw the apprenticeship at FitzRoy come up I thought that was quite unique, it wasn’t a corporate company but a charity, which really appealed to me.

“The interview came around really quickly and I found out I got it the same day â which I was so pleased about. I have really enjoyed the apprenticeship so far; everyone is so friendly, and you can tell they want to be here. At FitzRoy you’re seen as the person, not the employee number.

“I’ve really been able to put my knowledge into practice; I haven’t just been sitting at the side lines. I would definitely recommend the apprenticeship route, you get trained, you get paid and you get to work alongside great people.”

If you want to follow in the footsteps of Chris and Tom and are interested in an apprenticeship at FitzRoy, contact our recruitment team at recruitment@fitzroy.org