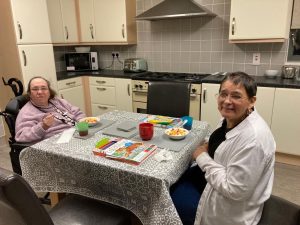 After a rocky start, Susan and Jackie, who both live at Sopwith Croft our supported living service in Birmingham, have formed a lasting friendship.

Susan has lived at Sopwith Croft for five years and really enjoys living here. Jackie moved in last year and found settling in quite difficult and overwhelming.

“When Jackie first moved in, she and Susan would often clash and not get along. But over the last six months we have seen a big improvement in their relationship.

“Jackie is much happier. As she has settled in, we have supported her to become so much more independent. She does the cleaning and will often call them her ‘chores.’ When making a cup of tea for herself, she now asks her housemates if they would like one.

“The staff have been incredible supporting Susan and Jackie to build a friendship. They are constantly communicating with them both, making sure they are greeting each other, having dinner together and just making sure the conversation is positive about each other.

“I believe you get the best out of people through empowerment, so I have let the support workers take the lead with their ideas and run with them. They are always putting the people we support first.

“It has made such a difference. Last week was the first time that Susan and Jackie ate a full meal together. Usually, they eat in separate rooms.

At FitzRoy we believe all people with learning disabilities should have positive and lasting friendships.

“It’s taken them a while to warm to each other – but now they have realised how much they have in common. They have similar interests such as fashion, films and music. They love listening to Smooth radio.

“Having this friendship has really improved both Susan and Jackie’s quality of life and their emotional wellbeing. You can see the happiness it brings to them both.

“Now they have become friends, they want to go out to the cinema together. The next step is to continue to support them to do things together, so they can build on their new found friendship.”