Janine moved into her forever home at Binley Road, our supported living service in Coventry, at the start of December. She’s quickly become one of the family, making friends, and enjoying a trip to watch Jack and the Beanstalk with the other residents last week. 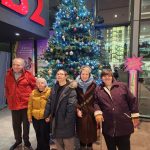 Janine was living at home with her mother until October last year. Sadly, her mother become unwell and had to move into a care home, and Janine was moved into a short-term respite service.

Janine came to visit Binley Road with one of her sisters and a support worker from her day service. She liked the house, the bedroom and the other residents and her social worker confirmed that she would be happy for Janine to move in. In preparation for her move,  Janine visited the house on several occasions to get to know the other people we support and the staff team. 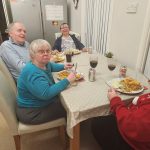 Service manager Tracy said “To add to all her stress and upset of leaving her family home, her mum and a sister sadly passed away earlier this year, so it was important we got something in place for her so she could settle in a new home and have no more upheaval.

“We were concerned that due to the length of time she’d been at the respite service that she wouldn’t want to move again, but she’s fitted in like she’s always lived here.”

She’s got such as good sense of humour and laughs and jokes with the staff and has started to build a good friendship with one of her new housemates Carol, who’s delighted she’s no longer the only woman.

“Now Janine can often be found doing her favourite pastimes, putting together jigsaw puzzles and days and nights out. The four housemates are all planning a trip to Butlins next year.”