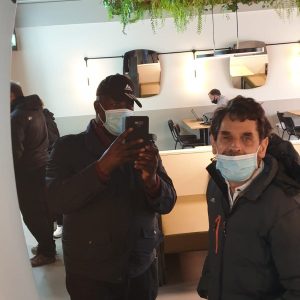 John is overjoyed after he went swimming for the first time in 30 years.

John lives in our supported living service in Nottingham, and very much enjoys his own company and taking part in activities by himself. The team at Boxley Drive decided to take John swimming for the first time since he was a child, and the experience couldn’t have gone better.

Service manager Emily said: “John moved into our service two years ago, and when he moved in we were told he wouldn’t go into a shop, he wouldn’t get on a bus and that he would get easily agitated. Since living at Boxley Drive John has done nothing but prove all of that wrong.

“John does really enjoy going out and taking part in activities, he just prefers doing things on his own rather than with a big group of people. He also likes to have time to relax at home after doing an activity. We put our heads together to think about what different activity he could enjoy on his own, and he we contacted his brother to find out if he could swim. He said he could but hadn’t been in about 30 years. We asked John and he seemed keen so we thought let’s give it a go.

When support workers Melissa and Reg got back from the swimming pool, they said they had never seen him so happy.

“It is really hard to put into words what an incredible experience it was for him, he loved it so much – we are now going to go once a week.”

Support worker Melissa said: “Taking John swimming was just an incredible experience – because he hadn’t been in so many years we were unsure whether he would enjoy it or how it would go. He was so happy, I don’t think I’ve ever seem him like that, it was such a rewarding feeling.

“I have worked for FitzRoy for nine years, and it is in moments like that where you realise why you do what you do. This is an incredible achievement John has made, and I am so pleased that now he wants to go every week.”

Emily said: “I am so proud of my team for supporting John on an experience which has been so impactful, and I am proud of John for pushing outside of his comfort zone and achieving such a brilliant goal after 30 years.”