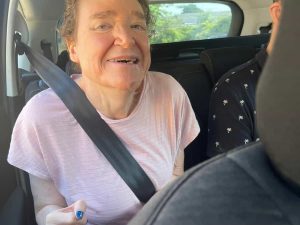 Two years ago, the team at Turnbull Close, our residential care home in Kent, were told that Karen had a life expectancy of up to 12 months after an accident and a spell in hospital had left her very frail and unable to eat.

Now she has defied all medical predictions and is thriving and living her best life, thanks to the patience and dedicated work of the staff.

Karen had been admitted to hospital with eating difficulties after almost choking on some food. She then contracted pneumonia and became very frail. She was unable to eat orally, and doctors decided any further operations to enable her to get nutrition in other ways would be too much for her. The team were told they could give her small amounts of her favourite foods despite the risks of further illness to enhance her pleasure in her remaining days. This was devastating news.

When Karen came home from hospital, Debbie, the service manager, was told palliative support was her only option and that Karen would continue to get weaker and then stop eating. She was supported by a hospice team who came in to administer controlled medication for pain and anxiety relief.

Debbie said “We were told that her life expectancy was up to 12 months. She had become incredibly frail and was unable to walk any distance and had to hold on to furniture to move around her bedroom. She stopped talking and did not smile.

“We were also advised against supporting her with the covid vaccinations and so she had to stay in her bedroom to protect her through the height of the pandemic, which was heart-breaking.”

Our staff continued to support Karen as best they could. After a time of giving her small amounts of her favourite foods, they slowly start introducing more food and a bigger variety. She responded well and as her appetite increased so did her energy and this improved her mobility.

As she grew stronger, she was finally well enough to have her covid vaccinations, so she was able to come out of her bedroom and continue her recovery.

After many months of care, Karen was reassessed by the community nurse who stated she should no longer be classed as needing palliative care.

Now in 2022, with patience and care, Karen is back to her usual eating patterns, can walk around her home independently and her smiles are back, especially when going out.

Debbie said “It’s been a tough journey with Karen but to see her laughing again for the first time when she had her hair cut and then hearing her say ‘cup of tea’ have been such fantastic moments.

When she celebrated her birthday last December it was such a joy for all of us here because we never thought we would see it. We’re hoping she’ll continue to go from strength to strength and has many more years ahead of her.