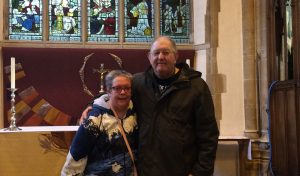 Keeping in touch with loved ones has been one of the biggest challenges our country has had to face during lockdown, and that has been no different for Angela, who we support in Norwich. Angela has been with her boyfriend Kenny for six years and now staff have been helping her get creative and keep the love alive under lockdown.

Deputy manager of Skedge Way, Claire Howlett, said: “Angela met Kenny in one of our services in 2014. She then moved to Skedge Way and Kenny also moved but in the opposite direction. They meet up once a fortnight at the bus station in the city and have lunch at a cafe, everyone knows them in there because they go all the time.

“They phone each other twice a week and chat about what they are going to do on their next date. Sometimes Kenny’s brother would pick him up and bring him to Skedge Way on the weekend which she loved.

“When lockdown began we were worried about how Angela would cope because she loves her routine of seeing Kenny, she’s a really sociable person and would be out all day if she could. But she is coping really well, we are proud of how she has managed to keep going and keep the love alive under lockdown.

“They now talk to each other every night on the phone and chat about their day which is lovely, and she’s been writing him letters too. Staff have brought in arts and crafts for Angela to make lovely letters for Kenny, then posting them for her. It’s given her something to look forward to doing and it’s a real boost to her day.

“I think it’s so important for all the people we support to be assisted in keeping in contact with loved ones during lockdown. It’s so beneficial for your mental health and being able to hear a voice or see a face of your loved one is so uplifting.”

“Angela has also kept herself busy with making a patchwork quilt – it’s getting bigger by the day! She can’t wait to show her friends at Independence Matters when she is able to return. She also has great friends living with her at Skedge Way, Yvonne and Phyllis. Staff have brought in skittles so the three of them can play skittles in their hallway, they are doing knit and natter days and have had karaoke afternoons. Members of the staff’s families have also been donating wool to keep them knitting!

“The staff have been absolutely brilliant since lockdown and I am so proud of them. They realised early on that they were going to have to keep Angela, Phyllis and Yvonne occupied, and they have been coming up with all kinds of activities like fashion shows, it’s been brilliant. We have a really amazing team.”